Meeting Up with Huo Daishan, founder of Huai River Guardians

I had the good fortune the other day to meet with Huo Daishan, the founder of the environmental NGO, Huai River Guardians (Huaihe Weishi).  Huo is an small, unassuming man who has committed much of his adult life to monitoring the Huai River, China's third largest, home to over 150 million people, and one of the most polluted waterways in the world.  The Huai also runs by Huo's hometown in Henan where he has spent his entire life and where he now lives with his family, including his sons who are now working at his organization.  For his work, Huo received the Ramon Magsaysay Award  in 2010.

Huo was a photojournalist in the late 1980s and talked to me about how he was given an assignment to photograph parts of the Huai but found the river too polluted in many stretches, so he started instead to take pictures of the river to bring attention to an environmental tragedy that was taking place on his doorstep.  He told me how in the late 1990s, he began visiting "cancer villages" that were emerging along the river and witnessing people of different generations dying of cancer.  By 1998, he had quit his job and began monitoring the river on a full-time basis, and in 2000, he started his NGO, Huai River Guardians which now consists of hundreds of volunteers who live by the river and help to monitor water quality.

I went to see Huo when he came to Beijing for a Am Cham event.  I met up with him two days after the event at his very humble 40 yuan a night guesthouse -- bare walls, 3 single beds with box springs and mattress -- near the Military Museum to interview him for my book.  As soon as we met, he told me he had won the lottery at the Am Cham dinner because his name card was drawn, so all the money raised that night went to support his NGO.  He thought the whole event was pretty funny, that his name card generated that much money for his organization.

I planned on spending an hour or two interviewing him, but as things sometimes turn out, the interview turned into a get-together with his friends who started texting him a few minutes into our interview.   Huo suggested we meet with them at a nearby restaurant and get some dinner, then come back to the guesthouse to continue the interview.  I agreed but had this sinking feeling it wasn't happening.  We met up with his friends -- a CCTV employee who had befriended Huo several years ago when CCTV did a documentary on the Huai river and another environmental NGO (EnviroFriends) founder who was a kick in the pants and seemed to know every other environmental activist in Beijing.  Huo told them his Am Cham story.  It was a fun evening all in all and I got great gossip from Huo's friends, but I never got the chance to finish my interview with Huo because we ended up talking until late and I had to get home.  I left but not after taking a picture with Huo and telling him I'd meet up with him at his hometown where we finish the interview. 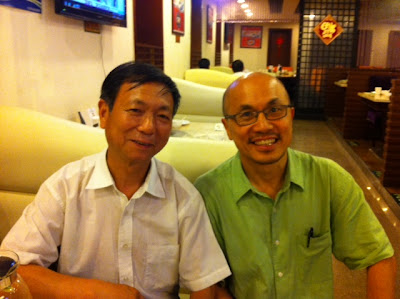 Posted by NGOs in China at 8:29 AM No comments: Links to this post